"The Middle" cast just celebrated their 100th episode and actress Eden Sher wasn't feeling up to par.
Sher broke her foot while on a surfing holiday recently. The 21 year old actress, who portrays Sue Heck on the ABC comedy, was seen wearing a brace on her right foot during an appearance on "The View" Wednesday.
She joked that this accident would fit in with her on-screen character's storyline. "This is the most 'Sue' thing I've maybe ever done. I broke my foot surfing... I fell off my board and I flailed in the water and... the side of the board hit the side of my foot," Sher said.
Instead of seeking medical attention right away, Sher waited three hours before getting help. She was convinced the pain was part of the surfing experience.
She explained, "I was like, surfing is all about pain, right?"
Reference: Contact Music
If you believe have a foot problem and do not currently see a podiatrist, call one of our six locations to make an appointment.
Connecticut Foot Care Centers
Podiatrists in CT
Visit our website, like our page on Facebook, and follow our tweets on Twitter.
Posted by Unknown at 4:13 PM No comments:

Can I Have A Second Toenail On My Pinky Toe?

Have you noticed at the side of your pinky toe what appears to be a second toenail? Looks weird, doesn't
it??? Maybe you've tried to pick it off, and then lo and behold, it returned.
So what is this excess nail on your toe? It's actually not a nail, it's a corn. It's called a Lister's corn, named after Dr. Joseph Lister, a 19th century doctor who fought for clean conditions in operating rooms. And yes, he got a corn named after him.
If you'll recall, a corn occurs when there is an excess amount of pressure or friction, usually from shoes, on an area of the foot or toes. The foot will try to compensate for this friction by creating an extra layer of skin to protect itself. That works out OK for a while, and then more.... and more... and more... and MORE skin becomes a bump on your foot. Now we have a problem of a different sort.
Corns are not a serious foot ailment, but can be unsightly and painful at times. When you're putting on your favorite shoes your corn will make you do a little yelp. Corns can become infected from rubbing from shoes.
A Lister's corn typically forms on the inside or outside of your pinky toe. This hard corn is different from traditional corns because it can form with or without shoe pressure. They develop because of pressure on the toe and the toe itself. Those with Lister's corns usually have small toes that roll outward, and the corn forms because of the constant rubbing against the ground.
So how do you know how have a Lister's corn? If you have a hard, thick, bump on the outside or inside of your toe, or what looks like an oddly shaped toenail, it's likely a Lister's corn.
To prevent Lister's corns from recurring, wear shoes that have a wide toe box that will let your toe lie flat. You can cover the corn with a pad as well to relieve some of the friction that is occurring.
For those who have Lister's corns that just won't go away, your podiatrist may do one of two procedures to relieve the pressure. When the corn is on the inside of the toe, they will do a condylectomy, where they file away part of the bone that's rubbing against the ground. Patients are typically back on their feet within a few days of this procedure. If the Lister's corn is on the outside of the toe, podiatrists will do a terminal Symes procedure, where they will remove the small bone at the top of the toe. Patients usually recover within a few weeks.
If you believe have a foot problem and do not currently see a podiatrist, call one of our six locations to make an appointment.
Connecticut Foot Care Centers
Podiatrists in CT
Visit our website, like our page on Facebook, and follow our tweets on Twitter.

I Have A Short Fourth Toe 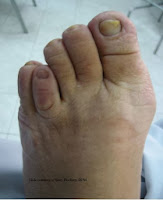 Brachymetatarsia is a condition in which one of the bones of the foot is significantly shorter than the others. This condition typically affects the fourth toe. When looking at the foot, the fourth toe is much shorter than those surrounding it, and it may also appear as if it is raised up, with the third and fifth toes touching below.

The condition may be as a result of a congenital defect or an acquired defect. Congenital causes include Aarskog syndrome and Apert syndrome among others, along with acquired trauma. Simply, the metatarsal bone fails to develop fully, or the growth plate closes prematurely. This condition appears 25 times more in women (1 in 1820) than men (1 in 4586).
Diagnosis is easily done with an x-ray of the affected toe. Usually patients come in with concerns about the toe's appearance, looking for cosmetic surgery to correct the abnormal shape and size, but often learn that there is a significant defect in the bone. Patients may notice that the toe is not carrying its share of the weight, which results in pain and discomfort. They may also have a difficult time selecting shoes because of the toe's shape.
In many cases brachymetatarsia causes no pain or discomfort and will require no treatment beyond careful shoe selection. For some, surgery may be needed.
If you believe have a foot problem and do not currently see a podiatrist, call one of our six locations to make an appointment.
Connecticut Foot Care Centers
Podiatrists in CT
Visit our website, like our page on Facebook, and follow our tweets on Twitter.
Posted by Unknown at 1:17 PM No comments:

Even if you don't know much about reality tv, it's likely you know who Kate Gosselin is.
Gosselin, the mother of eight children, and former star of Jon and Kate Plus 8, has been on Dancing With the Stars, blogged for various outlets, and been flamed on the media.
Gosselin, who has taken up marathon running since her show Kate Plus 8 was cancelled will be holding off hitting the pavement soon. Gosselin recently tweeted, "Dear broken foot, My running shoes say they miss you terribly... I'm so frustrated I could cry that I can't pound the pavement for awhile :(."
The reality star suffered a mishap with her kitchen island, not surprising because of the amount of time she spends in the kitchen. Gosselin released a new cookbook called Love Is In the Mix, which has recipes like "Family Yuck Pie", "Cheesy Tuna Pockets" and others. She spends more than 80% of her time in the kitchen, so that was a likely place for an accident to happen.
Gosselin revealed in an interview that she would love to get back on television. "I wake up every day dreaming of that second chance. I don't think I appreciated it though. But I would love to take what I learned and gosh, knock it out of the park next time."
Gosselin is hoping her new cookbook will lead to another reality program, cooking show, daytime talk show, or even work acting. She's keeping her options open, as she's the sole provider for her brood of eight.
References: Gather.com and TheStar.Com.
If you believe have a foot problem and do not currently see a podiatrist, call one of our six locations to make an appointment.
Connecticut Foot Care Centers
Podiatrists in CT
Visit our website, like our page on Facebook, and follow our tweets on Twitter.
Posted by Unknown at 4:03 PM No comments:

Toe deformities are common in children. These conditions are generally congenital, with one or both parents with these problems. Toe issues are typically present at birth and will become worse over time. Unlike children who are "pigeon-toed", children rarely outgrow this deformity.
In infancy, toe deformities are not usually a sign of another condition. For parents, it's usually a cosmetic issue. But as the child grows, the toes transform from flexible to rigid and become symptomatic of another condition. Many toe deformities will respond to conservative treatment. Traditional treatment has been digital splitting and exercises, but those often do not lead to good outcomes. As the deformities progresses and the toes become more rigid, surgery is generally the only option.
Underlapping toes can be seen in both children and adults and typically affects the fourth and fifth toes. A special type of underlapping toes is called congenital curly toes, and is common among families. Toes three, four, and five may be affected.
The cause of the deformity is unknown, but may be due to an imbalance in muscle strength of the small muscles of the foot. Combined with a small abnormality in the placement of the joints of the foot below the ankle joint called the subtalar joint, it creates a pulling of the ligaments in the toes, causing them to curl. Weight bearing increases the deformity and the folding of the toes results in the formation of callus on the edge of the toe. Tight fitting shoes aggravate this condition.
Treatment depends on the age of the patient, degree of the deformity, and symptoms. When symptoms are minimal, most podiatrists will recommend waiting and seeing how the condition progresses. If surgery is required, the degree of the deformity determines the procedure. A flexible toe will only require a simple release of the tendon, but a rigid toe may necessitate the removal of part of the bone.
Overlapping toes are identified by one toe that lies on top of another toe. The fifth toe is most often affected, but the second toe can be as well. The cause of this deformity is not known as well, although it is speculated that the position of the fetus in the womb during development is a potential reason. Sometimes overlapping toes are seen in families.
Treatment for overlapping toes depends on how quickly the condition is diagnosed. For infants, passive stretching and adhesive taping is commonly prescribed. This treatment can take 6 to 12 weeks and recurrence of the deformity is likely. Like underlapping toes, this problem will rarely correct itself. Occasionally as the individual grows, the deformity will go away. If surgery is required, a skin plasty is required to release the contracture of the skin associated with the toe. A tendon release and release of the soft tissue around the joint at the base of the toe may also occur. Cases that are severe may require the toe to be held in place with a pin. The pin exits the tip of the toe and may be left in place for up to three weeks. During recuperation the patient must limit their activities and wear a surgical shoe or removable cast. Excessive movement will greatly affect the outcome of how the toe looks. Following removal of the pin splinting of the toe may be required for another two to three weeks.
If you believe have a foot problem and do not currently see a podiatrist, call one of our six locations to make an appointment.
Connecticut Foot Care Centers
Podiatrists in CT
Visit our website, like our page on Facebook, and follow our tweets on Twitter.
Posted by Unknown at 1:05 PM No comments: